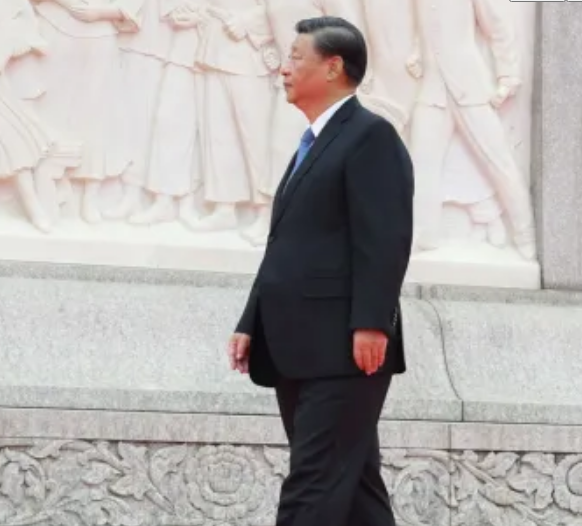 Premier Li Keqiang expressed caution a week ago, saying China needed to rethink the pace of the country’s energy transition as a power crisis threatened to keep factories in the dark and homes without heat during the winter.

By Friday the central bank finally spoke on the debt crisis at China Evergrande Group, saying the risks were “controllable” and lenders should keep credit to the real estate sector “stable and orderly.” That came shortly after Bloomberg reported that financial regulators told some major banks to accelerate approval of mortgages in the last quarter.

“China is confronting now a confluence of rising structural economic headwinds,” said George Magnus, research associate at Oxford University’s China Centre. “Stability and order will be craved above all things but within the context of a very defined political agenda. The Party cannot afford to have anything like Evergrande or inflation go off the rails.”

The pullback shows the difficult balancing act Xi faces in overhauling the world’s second-biggest economy in a way that doesn’t cause too much pain for the nation’s 1.4 billion people, about 40% of whom earn just 1,000 yuan ($155) per month on average. Xi’s push for “common prosperity” has underpinned a slew of policies aimed at tackling widening inequality, which poses a long-term threat to the legitimacy of the Communist Party — and ultimately his own political future.

While it’s important for Xi to assert his authority ahead of next month’s plenum and next year’s Party Congress — a twice-a-decade leadership reshuffle at which he’s expected to secure a precedent-breaking third term — any economic downturn that leads to social unrest risks weakening his grip on power. Slowing the pace of change in key areas would allow Xi to ease immediate pressure without altering his broader plans to remake China’s economy.

“Xi has a low tolerance for outcomes that directly cause a lot of ordinary Chinese to suffer, because that would create serious risks to political stability and party legitimacy,” said Neil Thomas, Eurasia Group’s analyst for China and Northeast Asia. “The key stakeholder that Xi is determined to protect above all others is the Communist Party itself.”

The severity of China’s energy crisis and property slowdown has surprised economists, prompting many to downgrade their full-year economic growth forecasts. Third-quarter figures released Monday showed the challenge: Gross domestic product expanded 4.9% from a year earlier, down from a previously reported 7.9% in the preceding quarter. China’s stock benchmark CSI 300, one of Asia’s worst performers this year, fell about 1.2%.

While Chinese policy makers have expressed confidence they can hit modest growth targets and haven’t signaled plans for stimulus, authorities have recently struggled to calibrate their approach. Last month Bank of America economists Miao Ouyang and Helen Qiao warned the credit crunch was “unnecessarily aggressive” and would work against “the policy goal of a healthy and stable property market.”

At a virtual roundtable last week on the power crisis, representatives from European businesses in China said their factory managers received late-night text messages from government officials demanding they halt production the next day. Local authorities, they said, couldn’t differentiate between companies based on their energy use, instead taking a rigid one-size-fits-all approach largely out of fear of angering Beijing.

At the same time, top leaders did act quickly to ease price controls on the sector that had been in place for years in a bid to ease the crisis, which was stoked by a combination of rising global commodity prices and overzealous local officials seeking to hit emission-reduction targets. The State Council this month announced China would raise maximum electricity rates and gradually allow all coal-fired power to be traded on the open market.

In some ways, the start-stop nature of Xi’s reform push is a built-in feature. The Communist Party’s Qiushi Journal on Friday published a more complete version of one of Xi’s speeches in August, which emphasized the need for “gradual and orderly progress” in achieving “common prosperity.”

“It is impossible to achieve overnight,” Xi said.

The goal, he added, was ultimately to ensure social harmony through growing the middle class and reducing the proportion of rich and poor “to form an olive-shaped distribution structure.” He called for a stronger public sector and improved social-safety net while also emphasizing the need for upward mobility and mobilizing “the enthusiasm of entrepreneurs.”

At one point he acknowledged that China still hasn’t figured out how exactly that will work: “We have a complete solution to the problem of poverty, but we still have to explore and accumulate experience in the issue of how to get rich.”

One key aspect to Xi’s plan involves strengthening patriotism, seen most clearly by China’s moves to press its claims on Taiwan, a self-governed democracy. Chinese warplanes conducted a record number of sorties near the main island earlier this month, leading the U.S. to denounce Beijing for “provocative military activity.”

At the same time, China is dialing down tensions with the U.S. and its allies. Beijing had a relatively muted response to reports that a small number of American military advisers were deployed to Taiwan, and Xi agreed to a virtual summit later this year with U.S. President Joe Biden. The Chinese leader last week also set up a summit with the European Union later this year.

While China’s use of nationalism shows it needs a “non-economic means of trying to promote regime legitimacy,” right now Xi is focused on getting the economy stabilized, according to Matthew Gertken, geopolitical strategist at Montreal-based BCA Research, which provides global macro research.

“On the current trajectory there is a clear and present danger of widening illiquidity, collapsing property prices, credit crunch, financial and economic crisis, and sociopolitical problems,” he said. “These outcomes may ultimately be unavoidable, but first the regime will moderate policy to try to avoid them.”

The Perils of ‘Green Business’

Oswaldo - August 4, 2021 0
Corporate sustainability is broken, and it becomes ever more difficult to pretend otherwise. The perpetually upbeat messages about our progress in corporate greening ring...

Fuel pump and other issues that can happen in your Kawasaki Mule with little...

Oswaldo - April 12, 2022 0
Kawasaki Mules are 4 all-terrain machines. Farm owners and hunters use them to transport equipment and labor gear to distant spots in farmland and...

How long should your business plan be?

Oswaldo - August 6, 2021 0
As mentors with SCORE, we get many questions about how long and detailed a business plan should be. To answer this question, it may...

Oswaldo - December 15, 2021 0
In the pellet industry, most people want to get into the wood pellet making line because it's the most common type of pellet worldwide....

What to Consider for the Best Car Seats