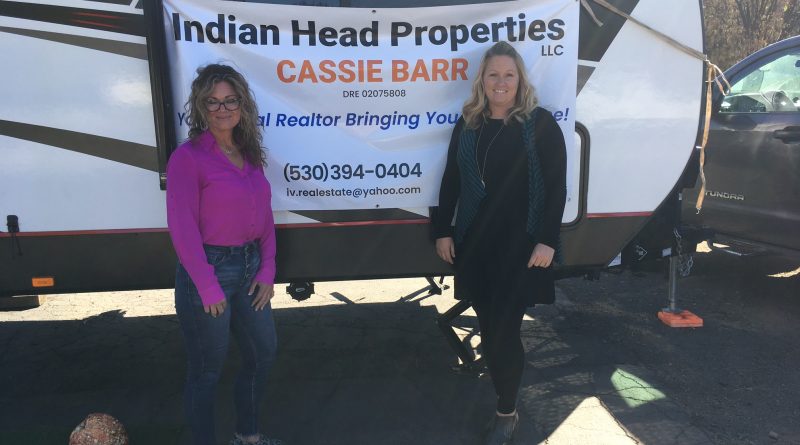 “We’ve been extremely busy,” said Cassie Barr of her new business Indian Head Properties. Her new associate and long-time friend Alicia Hammerich sits beside her and nods in agreement. Hammerich just got her license this month. The two women, both long-time Greenville residents who are about to become empty nesters, are excited to do their part of the Greenville rebuild and repopulating efforts.

The women sit across from each other at the trailer’s table with their laptops and phones dinging away with notifications of people needing to speak with them.

The women have their experience and knowledge of the area and the families who lived here on their side. Indian Head Properties, named after the valley’s landmark mountain ridge, is the first new business to open since the Dixie Fire took the town on August 5.

That busyness Barr speaks of has mostly to do with the existing properties left in Greenville and the sellers—mostly local retirees—who’ve decided to sell their homes that escaped the fire. Retirees have left in the last two months to live closer to their children and grandchildren in other parts of the state and in other states through out the country.

Retirees are also facing the new reality of canceled fire insurance or having to figure out a way to pay on the California Fair Plan which can drive insurance prices upwards of $4,000 a year, according to Barr—hard to do on a fixed income.

The housing shortage in California—and in particular Greenville after the Dixie Fire—is driving the prices of existing homes upwards, not downwards—even after a disaster like the fire.

Who are the buyers? Local people who’ve lost their homes in the fire as well as people from outside of the area (usually the Bay Area) who are still looking for a work-from-home lifestyle that began under the beginnings of the COVID lockdown. According to Indian Head Properties, the median home price for the typical 3 bed, 2 bathroom house in Indian Valley is roughly $350,000. Not long ago, a price tag like that would be found in Quincy and Lake Almanor, but not necessarily Greenville unless there was acreage. Mount Hough Estates just saw a number of properties changing hands—most over $400,000.

Barr has been in the business three years. She was looking to make a change in her life and wanted to be able to start investing. First she worked for another real estate agent, but she wanted to grow into a a business ready to suit the needs of today’s Plumas County.

Hammerich was tired of corporate work and wanted to be able to have a retirement someday—a familiar sentiment for Plumas County residents who’ve eked out a living in an economically depressed region.

“We keep each other focused. It’s fun. There’s no negativity and we are reinvesting in our community,” said Hammerich.

Before the fire, Hammerich had been considering leaving the area next summer after her youngest son graduates and heads to the Air Force. But the fire and the opportunity to give back to the place she’s called home for almost 20 years, gave her another calling. She’s staying put and eager to be the other half of Barr’s team.

They realize right now is a sensitive time for many people whose houses have burned or whose houses did not burn.

“It’s okay to sell. People should know that. There’s a stigma after the fire—but don’t feel bad about your life choices. What’s best for you and your family (staying or leaving) can help another family have what’s best for them,” said Hammerich.

Until the cleanup is completed in downtown and other areas of Greenville that burned, they are not taking up representing the properties left decimated by the fire. They will be once clean up has finished and there isn’t environmental liability associated with the burned lots.

They equipped the new office with probably the only working Internet in downtown, a scanner, a printer, a plate of cookies and a fridge full of drinks. They’ve been attending all the local meetings they can to stay on top of the changes happening all around them so they can better point Greenville residents and clients in the direction they need to be in.

“It’s an exciting opportunity to be part of the rebuild effort,” said Hammerich. Their cell phones are pinging again—more former Greenville residents looking to move back to Greenville.

Green Business Ideas You Should Know

Oswaldo - April 2, 2022 0
As a business owner, you may be interested in starting a Green Business. It is not hard to become an eco-friendly business owner. Using...

Oswaldo - December 15, 2021 0
In the pellet industry, most people want to get into the wood pellet making line because it's the most common type of pellet worldwide....

Fuel pump and other issues that can happen in your Kawasaki Mule with little...

Oswaldo - April 12, 2022 0
Kawasaki Mules are 4 all-terrain machines. Farm owners and hunters use them to transport equipment and labor gear to distant spots in farmland and...

The Perils of ‘Green Business’

Oswaldo - August 4, 2021 0
Corporate sustainability is broken, and it becomes ever more difficult to pretend otherwise. The perpetually upbeat messages about our progress in corporate greening ring...

What to Consider for the Best Car Seats